(Just a bit of backstory pertaining to my Ravenloft character)


It was a night as sweet as could be hoped for, the tang of summer a fading spice on the autumn air. A cool night, the mists little more than plucking fingers slinking among the wagon’s wheels. Yes, a pleasant night, Islwynn sitting propped against the wagon while Kilimar stalked the woods beyond the campfire-light in the first watch.

Seated there, the crackle of the fire a counterpoint to Morgana’s needle as the rogue worked her wares a melody came back to Islwynn, floating down the corridors of memory unbidden to lips that formed half-hummed words.

Farewell to old Mordent, you sea-bound coast.
Let your marshes dark and dreary be.
When I am far away and mist-bound lost
Will you ever heave a sigh or a wish for me?

The song filled the caravan, the babe chewed his fist and drowsed in his father’s arms.  Pack well rounded by the caravan’s door, Islwynn rocked his babe, singing softly to lull Kristov to dreams.

“That damn giorgio song again?” A voice hissed at the caravan door, a dark-haired Vistani swinging herself up into Islwynn’s home.

“Eve to you, sister.” Islwyn sang, keeping the melody as he looked up. “Hush now, he’s almost abed.” Continuing to pace the wagon’s length, Islwynn eventually placed the babe in a basket beside his own swinging hammock. “You’re not at the fire.”

“Nor you, Islwynn.” Leaning against the caravan’s support, she eyed his pack. “You’re truly going.”

“The Rauni kno-“He started, only to be cut short with a gesture from the woman.

“You’re leaving, giving this up for… for what?!”

“Hush!” He hissed, “You’ll wake Kristov, you stupid doe!” Checking his son, Islwynn fussed over the babe for a spell before turning back to face his sister. “I must do this. It’s my calling.”

“Your –“she looked to the baby, then forced her voice still, “Your calling. That damn Giorgio church’s calling, you mean. It was stupid of you, listening to them! They’re not our people, Islwynn! They’re marks! That’s all they are!”

“Krista…” Crossing the wagon, Islwynn took her by the shoulders, “The Legions of the Night gather ‘round us. You’ve seen the fall of the cards. I can’t ignore what they say. I won’t. Mother w-“

“Don’t speak of her.” Krista jerked free, turning away. “She’d call this foolishness. Leaving your child, leaving your tasque. All for a bunch of witless Giorgio.”

“She would.” Came the quiet admission, “But still… I must go. Will you care for him, Krista? Raise him up in the ways?”

A sigh, and Islwynn nodded. Kristov would be safe. And he… he would make the world safe for the boy. Safe for all. Going to the basket that served for his son’s bed, Islwynn knelt. Words were spoken, soft and rich. Fingers trailing along the sleeping babe’s chubby fist, Islwynn watched his son a moment more. At last he rose, looking to Krista and finding a back turned to him.

Nodding, Islwynn took up his pack.  Looking back at the basket a final time before stepping out into the night.  It was a night as sweet as could be hoped for, the tang of summer a fading spice on the autumn air. A cool night, the mists little more than plucking fingers slinking among the wheels of his caravan.
Posted by Daniel Luce at 11:10 PM No comments:

Behold, after a five month hiatus I arise from the dead.

Anyway, on to the province.


I'm not really oto pleased with this one, but it's the first I've managed to knock out in months. I doubt I'll finish it, but for folks that want a floating island to play with... Now you have one!  3 miles to the hex, and there's a few locations of interest.

So... Why don't folks take it, see what they can make of it?  The black dot by the forest marks a town, the A is actually a mountain. Green blobs forest. 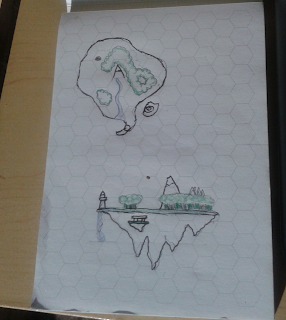 Let me know in the comments how YOU'D use this map.
Posted by Daniel Luce at 9:03 PM No comments:

Since its inception, I've been a subscriber to Mythoard. April's box, to my delight, included an A7 hex paper notebook. I've been wanting to improve my mapping abilities anyway, so I'm going to be carrying this little book around with me, doodling maps on each page. The purpose, aside from getting better at cartography, is to supply micro-settings, areas of interest that can be dropped into a game or farmed for inspiration, you'll find the first after the jump!


Recently, I purchased Barebones Fantasy (hereafter BBF). A lightweight system that's deserving of a review. But a review will have to wait until Finals are done and gone. But in brief: I enjoy the game, it's a lightweight system that's easy to modify, it's complete in one slim book, and it steps away from D&D sensibilities in most areas. I love my retroclones, but familiarity is starting to breed contempt.

One thing that BBF DOES provide, however, is something I'm not really a fan of these days. The Tolkien Quartet. By design, the authors chose to make those staples of modern fantasy (The Elf, the Dwarf, the Halfling and the Human) the available player races.

While I respect that, and understand it's an easy, familiar concept for even non-gamers to get into (Thanks Jackson!), I'm wanting something a bit different. Being a big boy with big boy sensibilities, I got out my glue stick, crayons, and construction paper before getting to work.  Click through the jump to see what I've done to make Barebones Fantasy mine.

A Fool and his Gold

So, I took part in Card Kingdom's (not an affiliate, by the way, I just like the shop.) Fool's Gold special. Not knowing what to expect, I was eagerly awaiting my envelope. And then today...

Email ThisBlogThis!Share to TwitterShare to FacebookShare to Pinterest
Labels: Magic the Gathering

In which Dan made stuff up, and everyone got seduced by a snake.

This weekend passed, I had the luxury of visiting a cabin with some friends and new acquaintances. Part of the festivities was a request to play Dungeons and Dragons. while two of the newcomers had never played the game before, the others were familiar with 3rd edition D&D. Not my favorite edition, but playing the game is more important than waving my edition banner.

The adventure was run with no prep other than looking at the lake and a picture of a boat for inspiration.

What followed was nothing that memorable, a boat-crawl that culminated in a battle with a serpent demon from the Frozen Hells. The guys had a blast with the snake, so I thought I'd share it here. Stats are somewhere between 3.5 D&D and an OSR block, so take of it what you will.

The Frozen God fights through domination, saving its bite for a last resort. Choosing the strongest looking foe, the serpent offers all other targets promises of power, plucking their heart's desire and framing it in a seductive air. They will have their wishes, if only they slay the Frozen God's intended victim.

The Frozen God's flesh is bitterly cold. Sucessful melee attacks inflict 1 point of subdual damage, and impart a chill that never quite leaves the character.

Finally, the Frozen God's  flesh is scribed with writhing  patterns of infernal runes, offering it a shield against spells arcane and divine. There is a 20% chance that the spell will backfire, resulting in a roll on the minor corruption table from DCC.

Not bad for a Level 1 mini-dungeon end boss, aye?
Posted by Daniel Luce at 1:45 PM No comments:

Thaumiel Nerub over on Google Plus was asking about Mushroom PC races for Basic / Expert D&D. Here's a project I've had kicking around in a design notebook for a while, but have yet to post. It's written more for Blueholme Prentice Rules (Holmes Basic), but hopefully he can find some use of it.

Blogs of Ages Past